How well has the prominent Asian country weathered the crises of the past year, and what are its prospects for growth?

Despite the ravages of the Covid-19 pandemic, China saw improvement in its jewelry market as 2020 drew to a close. This was a welcome outcome for the diamond industry, as China is both a major trade center and a significant consumer buying force in the sector.

In 2019, the value of China’s jewelry market came to CNY 610 billion ($92 billion), a 5% increase over the previous year, according to Bi Lijun, vice president and secretary general of the Gems and Jewelry Trade Association of China (GAC). While the pandemic then took a toll on the country’s jewelry retail sector in the first half of 2020, the industry gained momentum in the third quarter and was expected to recover to the year-on-year level in the fourth, Bi said during the 2020 International Jewelry Summit in Shanghai this past November.

The latest figures from China’s National Bureau of Statistics back this up: Jewelry retail for the full year decreased by 4.7%, but the sector gained year on year in September, October, November and December by 13%, 17%, 25% and 12%, respectively.

In particular, e-commerce has become a new engine of sustainable growth for jewelers, Bi noted. Online jewelry sales showed an estimated increase of over 15% in 2020, and companies have been accelerating their digital marketing with tools such as livestreaming.

As a country, China enjoyed an annual GDP growth of 2.3% in 2020 for a total of CNY 101.6 trillion ($14.7 trillion), according to the National Bureau of Statistics — the first time the nation’s GDP has exceeded CNY 100 trillion. It was also the second year in a row that China’s GDP per capita passed the $10,000 threshold. And while the International Monetary Fund predicted in October that the global economy would contract by 4.4% for 2020, it forecast 1.9% growth for China, and a further 8.2% increase for the country in 2021.

All of this is promising for the Chinese diamond industry, which is among the biggest in the world today.

China’s diamond market first started to develop in the late 1980s, and the nation became the second-largest consumer country in 2010, trailing only the US. In 2018, the World Federation of Diamond Bourses (WFDB) listed Shanghai as a top world diamond hub.

This past October marked the 20th anniversary of the Shanghai Diamond Exchange (SDE). As China’s only gateway for importing polished diamonds under a favorable tax policy — 0% duty and 4% value-added tax (VAT) — it is an important stakeholder and barometer of the country’s diamond industry; the SDE’s net import data accurately reflects China’s official imports of diamonds for domestic consumption each year. This is notable, since nearly all diamonds in China are imported rather than produced locally.

“The SDE is a modern technological diamond exchange, very friendly and accessible to international traders,” says WFDB president Yoram Dvash. He praises SDE president Lin Qiang — who is also vice president of the WFDB — as “open and accommodating to foreign diamantaires. China is the second-largest market for diamond consumption, and its potential for future growth is huge. Clearly, the Chinese market is integrated into the world diamond market and has huge importance for the entire world diamond business.”

Before 2020, net polished imports through the SDE kept up a steady momentum, averaging an annual increment of 27% from 2002 to 2018. After the SDE adopted the favorable tax policy in 2006, it saw a surge in imports through 2011, and then three major drops during the intervening years. The biggest of these occurred in 2019 as diamond values declined worldwide due to price cuts — but unlike with the first two drops, the curve failed to turn upward again the following year. 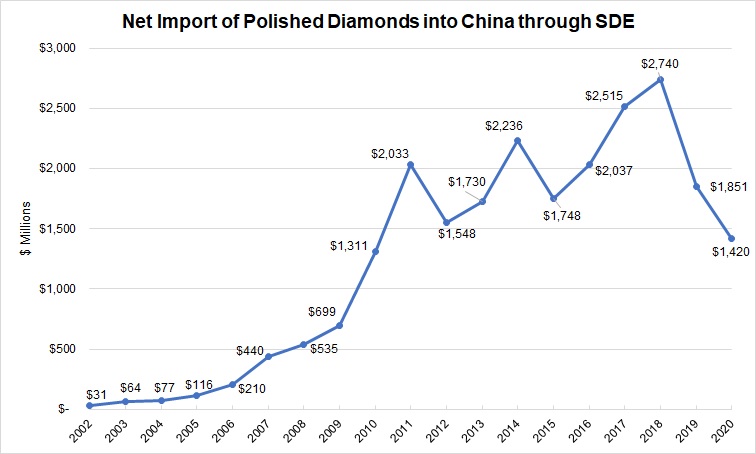 Based on data from the Shanghai Diamond Exchange (SDE).

When the Covid-19 crisis hit the global industry, it had an unprecedented impact on the retail market and supply chain. In the first eight months of 2020, diamond transactions through the SDE showed a major decline. Nevertheless, as the epidemic got under control in China, retail, import and wholesale activities gradually regained ground. The net import of polished diamonds in 2020 recovered to 77% of the figure for the same period in 2019, reaching a total value of $1.42 billion. The value of net diamond imports in October and November respectively increased around 60% and 84% year on year. From September to November, the monthly import value exceeded $200 million, while December saw 54% year-on-year growth at $191 million.

This article was originally published in the February 2021 issue of Rapaport Magazine. To download a PDF of this article, click here.