Stephen Lussier, the legendary De Beers executive who currently serves as its executive vice president for brands and consumer markets, is leaving that role after 37 years with the company.

Lussier, whose main responsibility includes overseeing the De Beers Forevermark and De Beers Jewelers brands, will still act as a strategic adviser to the company, and continue to chair the Natural Diamond Council, the diamond marketing group he helped found.

Lussier will be succeeded by Marc Jacheet, who most recently served as president of Tiffany & Co. Europe, Middle East, and Africa, and prior to that as president of Tiffany’s Asia-Pacific region. Jacheet has also held a number of global marketing roles with LVMH, Danone, and Unilever, in both Europe and the United States. 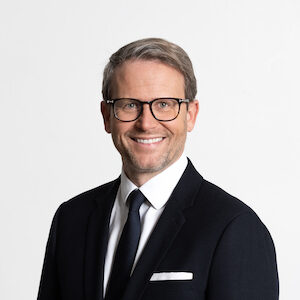 Jacheet will join the company on Feb. 1. He will also become a member of the group’s executive committee.

David Prager, who has frequently appeared alongside Lussier at industry events (and is also from the United States), will remain executive vice president and chief brand officer.

Lussier’s involvement with De Beers began at its then–U.S. ad agency N.W. Ayer, which he joined after getting an MBA from Columbia University and B.A. from Boston College.

In 1993, he became global director of the entire consumer and marketing department. Under his watch, the division produced still-remembered De Beers ad campaigns “Shadows” and “Hands” and launched epochal products such as the three-stone ring, right-hand ring, and Journey.

The move across the pond meant changes in his personal life as well: In 1995, he married Sophie Oppenheimer, a member of the family that then controlled De Beers. Lussier met his future wife when “she was hanging a painting in his office, but it was not until a year later that he took her out for lunch,” said Tatler.

In 2005, he was appointed to De Beers Group’s executive committee with responsibility for external and corporate affairs, at a time when the company had to deal with African governments’ increasing demands for beneficiation.

In 2009, he went back to his marketing roots and became CEO of the Forevermark brand, and in 20098, he was named executive vice president of marketing for De Beers Group. In 2019, he was appointed executive vice president of brands and consumer markets, overseeing all of De Beers’ downstream activities, including Forevermark and the De Beers jewelry chain, and helping to gather its various initiatives into the “one De Beers” strategy.