Press release – Moments ago at Sotheby’s Hong Kong, a significant new benchmark for the diamond market was set, as the extraordinary ‘De Beers Blue’ – a 15.10 step-cut Fancy Vivid Blue diamond, the largest of its kind ever to appear at auction – sold for HK$451 million / US$57.5 million – among the highest prices ever achieved, for diamonds of any colour, on the open market.

A prolonged eight-minute bidding battle between four contestants took the price well beyond the HK$380m / $48m pre- sale estimate, with the stone finally selling to a client represented by Wenhao Yu, Chairman of Jewellery and Watches at Sotheby’s Asia on the telephone. The final price achieved (HK$450,925,000 / US$57,471,960) is a near tie with the current record-holder for a blue diamond, achieved in 2016 when The Oppenheimer Blue (14.62 carats), sold for US$57,541,779.*

This wonder of nature had been recently cut from an exceptional rough stone discovered at the legendary Cullinan Mine in South Africa in 2021, one of very few sources in the world for extremely rare blue diamonds. In its masterfully crafted, newly formed state, it re-emerged as the largest vivid blue diamond ever to appear at auction and the largest internally flawless step cut vivid blue diamond that the Gemological Institute of America (GIA) has ever graded. Blue diamonds of this importance are exceptionally rare, with only five 10-carat+ examples ever having come to auction, none of which have exceeded 15 carats, making the appearance of this flawless gem a landmark event in itself. (Click HERE for more information).

Commenting on the sale result, Patti Wong, Chairman of Sotheby’s Asia, says: “The De Beers Blue captivated me from the moment I laid eyes on it. With its powerful vivid color, and breathtakingly beautiful cut, it is truly a once-in-a-generation stone, and quite simply the greatest blue diamond of its size I have ever seen during my 31-year-career at Sotheby’s. We are absolutely delighted that De Beers and Diacore trusted us to present this stone to the international market and its result is a clear confirmation of the growing appreciation, and awareness of the great scarcity of blue diamonds around the world.”

Wenhao Yu, Chairman of Jewellery and Watches at Sotheby’s Asia, added: “It is difficult to imagine a diamond that better illustrates the term Vivid Blue than this outstanding stone. The colour is simply astonishing and, for its size, it is in my experience truly unique. It’s fitting that a diamond of this calibre – now the third most valuable diamond of any colour to sell at auction – would launch our first major jewellery auction of the year.”

Bruce Cleaver, CEO of De Beers Group, said: “A tremendous result, this diamond ranks as one of the best De Beers has ever seen and we are incredibly proud to join forces with Sotheby’s to share this defining moment in history.”

Nir Livnat, Chairman, Diacore, said: “Diacore is privileged to have had the opportunity to partner with Sotheby’s in auctioning this incredible stone and congratulates its new owner on purchasing one of Earth’s most magnificent natural treasures. This rare masterpiece has been designed and crafted by Diacore’s special team, which has been creating some of the world rarest diamond creations, such as the 59.60-carat CTF Pink Star, the Millennium Blue Collection and many others.” 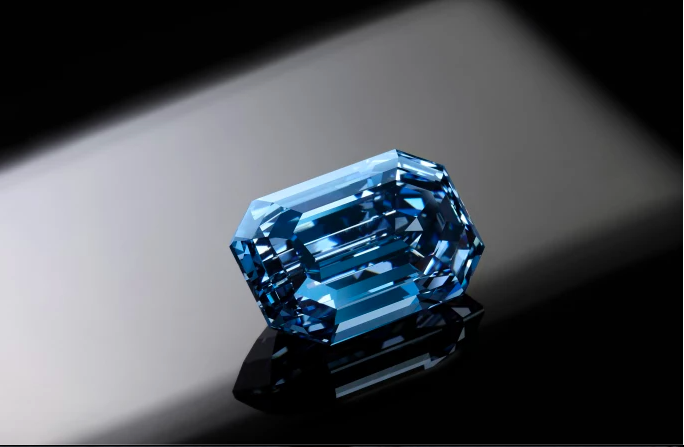 While a very small number of important blue diamonds were sold at auction over the last two decades, it was not until 2007 when the landmark Sotheby’s auction in Hong Kong sold a 6.04 carat, internally flawless emerald-cut Fancy Vivid Blue diamond for a record price of US$1,321,495 per carat, breaking the 20-year-old record held by the famous ‘Hancock Red’, and propelling all sizable Fancy Vivid Blue diamonds to new market levels of a minimum of US$1,000,000 per carat.

Since then, blue diamonds at auction have had an admirable auction track record. However, all previous prices were totally eclipsed first in 2014 by the Mellon Blue Diamond, renamed ‘The Zoe Diamond’ at Sotheby’s New York, which sold for US$32.6 million (US$3,348,205 per carat). In 2015, records shattered again when Sotheby’s Geneva sold ‘The Blue Moon of Josephine’, a 12.03 carat cushion-shaped Internally Flawless Fancy Vivid Blue diamond for US$48.5 million (US$4,028,941 per carat), which established the price-per-carat auction record for any diamond or gemstone.

*Sotheby’s now holds two of the top three prices for diamonds of any colour, and six of the top seven highest prices for Fancy Vivid Blue diamonds.

World auction records: Sotheby’s holds two of the top three prices for diamonds of any colour