As the diamond market considers its options during the industry-wide lockdown, manufacturers in India are planning a freeze on rough imports. The move has precedent. Back in 2008, as financial markets collapsed, India imposed a one-month moratorium on rough buying. Ultimately, it helped the local trade realign inventory and gain market share while other manufacturing and trading centers tried to continue with business as usual.

In a letter signed by various Indian trade bodies, the Gem & Jewellery Export Promotion Council (GJEPC) has called on all members to curtail rough imports for at least 30 days beginning on May 15. That would send a message to the banks that the industry was being careful not to raise its debt levels, and would also ease the financial strain placed on companies.

All of this would lead to a “faster restoration of normalcy,” the letter read. With no rough coming in, manufacturers can focus on depleting existing inflated polished inventory, particularly since demand from China and Hong Kong is slowly starting to resurface. In the meantime, they are hoping to resume some polishing activity; manufacturers have a sufficient buildup of rough that they bought from December through March to fuel their factories.

That, of course, was before the coronavirus spread globally, cutting off the trade’s renewed confidence just as demand was starting to pick up after a tough 2019. Indeed, the current crisis is all the more devastating for having hit the industry at a time when it was dealing with a challenging market environment anyway. 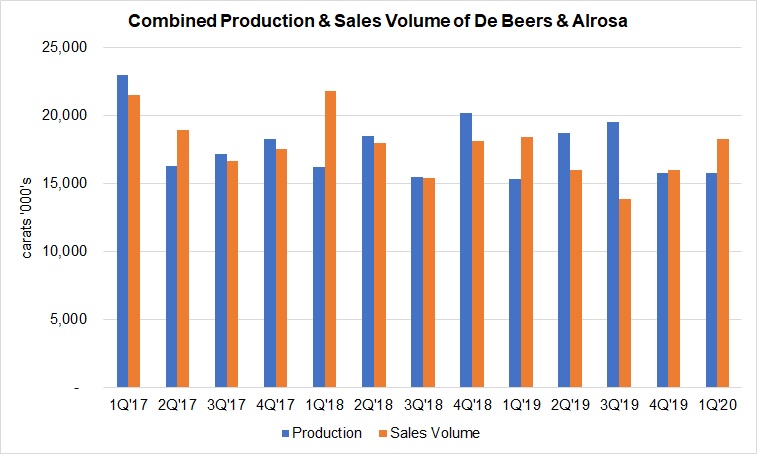 Last year, consumer demand in China slowed amid trade tensions with the US and political protests in Hong Kong. Manufacturers struggled to deplete the oversupply of polished in the market, and rough demand was weak due to that bottleneck in polished supply.

That all hit the mining sector hard. Rough prices, revenue and profits slumped during the year.

De Beers’ rough price index — which measures price changes for goods on a like-for-like basis — fell 6% during the year, but the company also noted a shift to a lower-value mix of diamonds. This brought its average price down by 20% to $137 per carat. Similarly, Alrosa saw a 6% decline in its index, with the average price of its sales dropping 17% to $98 per carat.

Price levels ended the year slightly above those from five years ago (see graph), following steep increases between 2016 and 2018. Manufacturers bought a lot of rough during that period, leading to the rise in polished inventory. 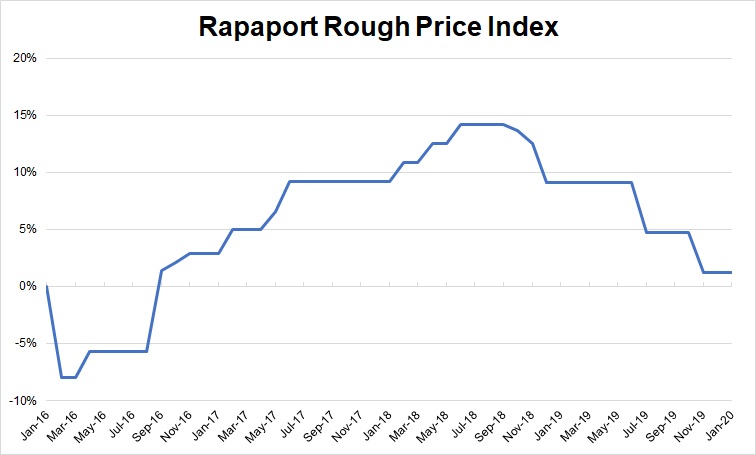 The miners are now caught in a quandary, trying to assess the market’s future requirements while almost everything is closed.

The mining sector shut down in March and April, along with US and European retail and the dealer and manufacturing segments. Mines in Botswana, South Africa and Lesotho temporarily closed or drastically reduced activity as the respective governments implemented a month-long lockdown. Sites elsewhere were placed on care and maintenance due to the depressed market, including Renard and Ekati in Canada, Liqhobong in Lesotho, and the Williamson mine in Tanzania; it is uncertain when they’ll be able to reopen.

The lockdown and resulting slump in demand will have a dramatic impact on global rough production and supply in both the short and long term, analysts have told Rapaport.