Sales were up 36 percent year-over-year in June and are pacing 24 percent ahead of last year at this point.

De Beers reported Wednesday [June 22] that sales of rough diamonds to sightholders and auction clients totaled $650 million in its fifth sales cycle of the year (June 6-21), compared with $477 million in roughly the same period last year.

Month-over-month, sales are up 8 percent from $604 million.

CEO Bruce Cleaver said diamond jewelry continues to perform well in the U.S. market, a trend reinforced by the positive sentiment in the trade following a busy and, many say, lucrative JCK Las Vegas show.

“The continued strength of U.S. demand for diamond jewelry and the gradual reopening of retail outlets in China following COVID-19-related lockdowns have supported the sales momentum of De Beers Group’s rough diamonds in the fifth sales cycle of the year,” he said.

Also helping to boost De Beers 2022 sales are the sanctions placed on Alrosa in light of Russia’s ongoing war in Ukraine, analysts have noted.

While the sentiment coming out of the Las Vegas trade shows largely is positive, the most recent reports about U.S. diamond and jewelry sales are mixed.

In its SpendingPulse report released June 14, MasterCard had jewelry sales increasing 22 percent year-over-year, and up 65 percent when compared with May 2019, pre-pandemic.

In a tweet, diamond industry analyst Edahn Golan called into question MasterCard’s bullish report, particularly as 2022 sales are up against a “fantastic” 2021. 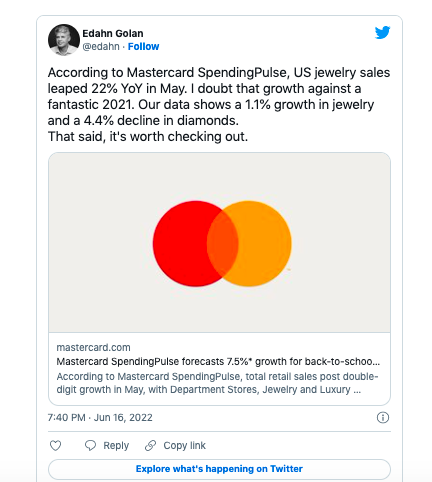