The rough market is buoyant after yet another price increase by De Beers, leaving many in the trade scratching their heads. Goods are selling at strong premiums on the secondary market — double-digit percentages in some categories — as manufacturers continue to boost production after the past year’s coronavirus-induced stoppages.

De Beers raised prices an estimated average of 5% during this week’s July sight, as first reported by Rapaport News. The increase was the fifth the company has implemented in eight months. Alrosa has made similar moves through June, and there is some expectation it will up prices again at its July sale.

The miners do not comment on pricing. They might justify the increases by pointing to several factors. They would note that demand is robust in the polished sector, driven by strong sales at retail. They would also look at the hot auction and tender circuit along with activity on the secondary rough market.

Indeed, polished prices are up 11% since the beginning of the year as measured by the RapNet Diamond Index (RAPI™) for 1-carat diamonds. And the rough tender houses saw increases of up to 20% in June versus April.

That may justify the hikes in the short term. However, the price increases will hurt the market in the long run. The move is already putting pressure on manufacturing margins, as one Indian banker stressed in a conversation on Thursday [July 15]. Rough prices in the primary market for De Beers and Alrosa supply have increased by 20% since the beginning of the year, versus the 11% rise in polished, Rapaport estimates. 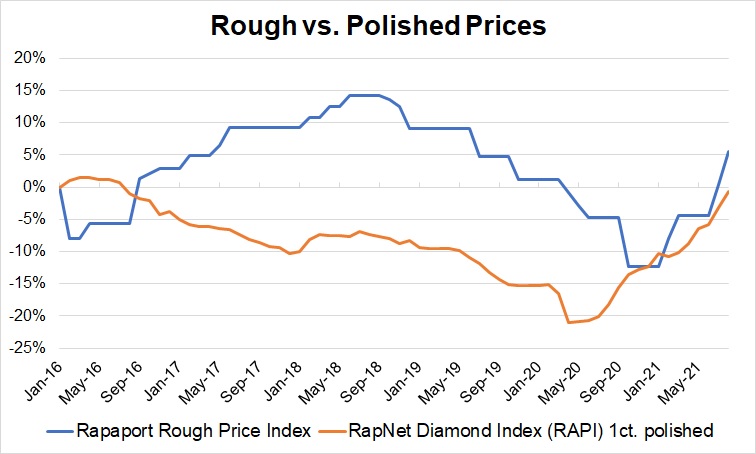 The miners would also view the dynamic through a broader lens, as we all do. Ultimately, the market is driven by four major forces: liquidity, supply, demand and expectation.

There is a sense that lenders have increased their exposure to the industry since the beginning of the year, injecting more cash for rough buying — although the banker we spoke with stressed his credit remains within reason. Notwithstanding the banks, the diamond midstream has emerged from the coronavirus crisis profitable and with good liquidity as manufacturers and dealers sold excess polished inventory, while rough purchases froze for a period in 2020.

In a surprising consequence of the pandemic, there was more available credit than demand at the start of 2021 (see “Banking on Diamonds” in the April issue of Rapaport Magazine). The concern then was that excess liquidity would lead to overexuberant rough buying.

That is playing out now. Manufacturers are paying high prices demanded by De Beers, Alrosa, and on the tender and secondary markets because they have the money to do so.

There is also an argument that they simply need the goods. Covid-19 restrictions have forced Indian manufacturers to limit their operations, and there is a glut in the supply chain due to ongoing delays at the Gemological Institute of America (GIA). That said, India’s polished exports reached $11.98 billion in the first half, exceeding pre-pandemic levels — 7% above the first six months of 2019. The country’s rough imports increased 24% for the same period over the two years to $8.74 billion. 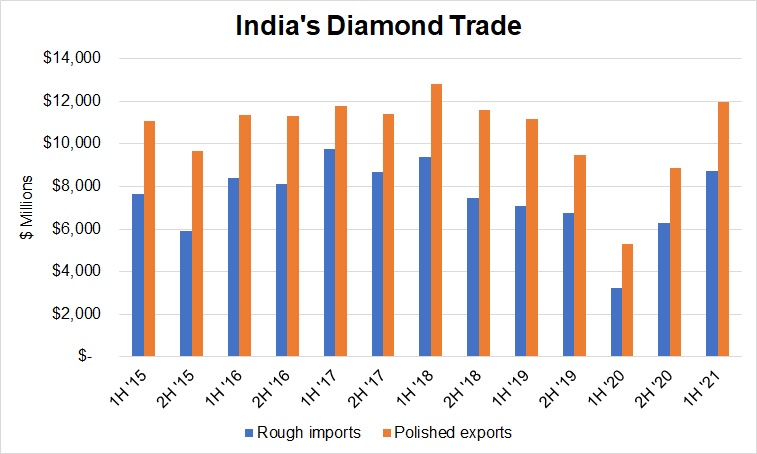 Meanwhile, polished demand is being driven by a strong retail rebound in the US and China. Most expect that momentum to continue in the second half of the year as jewelers prepare for the holiday season. US consumer confidence is on the rise, boosted by government stimulus checks and the resumption of gift-giving events and celebrations that were canceled during the pandemic.

Diamantaires are still reporting shortages in the polished market, particularly for 1- to 2-carat goods. Inventory on RapNet has increased since the beginning of the year for 0.30- to 0.89-carat diamonds but has been stable at relatively low levels for larger goods.

Perhaps inventory will rise at a faster pace as the GIA releases more polished in the coming months. However, it seems the mining companies are also being careful not to flood the market with goods. Production plans appear conservative considering the level of demand and that the Argyle mine closed last year, taking high volumes of rough off the market. We expect global production volume to decline about 4% in 2021 from last year’s lows, based on forecasts by six major miners. 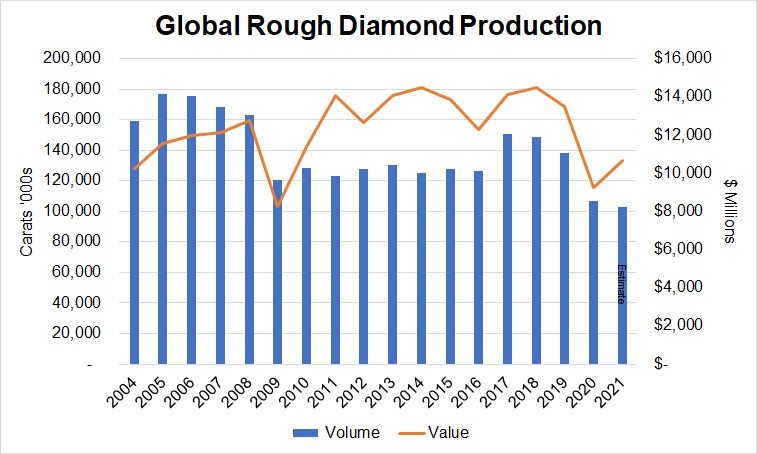